Why should go on a holiday to South Africa? Here you’ll find 10 reasons why you should visit South Africa and experience this wonderful country.

This is an especially compelling reason to visit South Africa. One dollar currently trades for about seven Rand and it usually hovers somewhere between six and seven Rand per Dollar. The Rand is even weaker in comparison to the British Pound (14 Rand per 1 Pound) and to the Euro (15 to 1). With such a strong currency conversion you can experience all the best that South Africa has to offer without spending as much as you would in another more expensive part of the world.

Also related to this point, South Africa has modern financial infrastructure, which means you can use your Visa and MasterCard throughout the country. There are also many ATMs that will allow you to use your American bankcard for withdrawing money, though they do charge some nominal fee similar to the fees you would be charged in the U.S. for using an ATM not owned by your bank.

South Africa’s scenic wonders are legendary. From Table Mountain to Blyde River Canyon, our mountains, forests, coasts and deserts will feast your eye and lift your spirit… 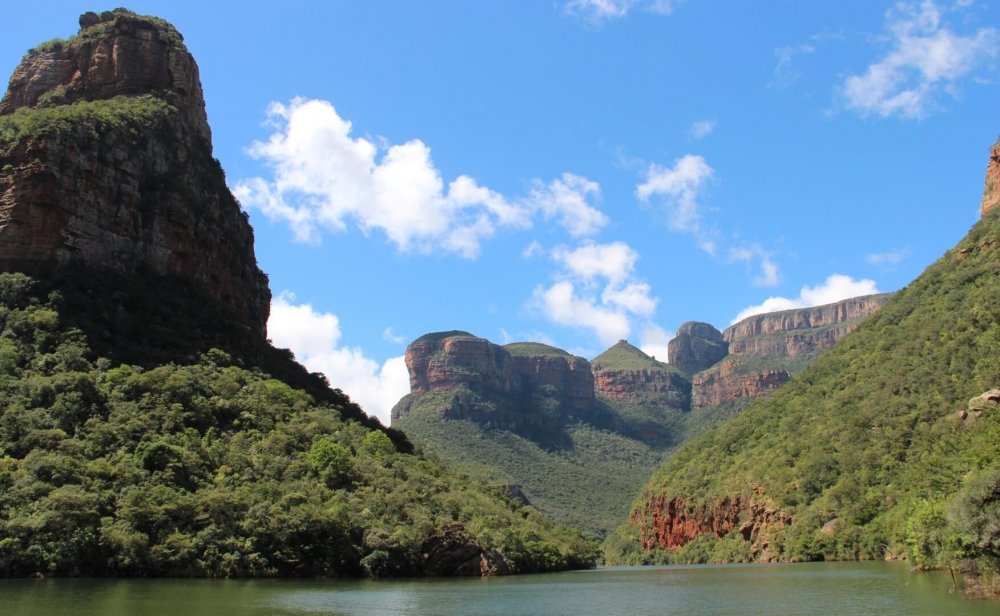 Whether you opt for Afro-chic or authentic Africa, you’ll find it easy to get around, find a comfortable place to stay, have a great meal, connect.

South Africa is the adventure capital of the world. South Africa has a wide range of activities available for the adventure junkie, such as: Bungee jumping, white water rafting, hot air ballooning, abseiling, helicopter rides and flips, canopy tours and shark cage diving to name a few. So if you are looking for something to boost your adrenaline levels whilst on holiday then make sure to include South Africa on your travels.

In general South Africa is a very sunny country, with many areas experiencing over 300 sunny days per year. The Western Cape, where Cape Town is located, has a Mediterranean climate with hot, dry summers and mild, wet winters. The interior of the country is generally temperate and the northeast region, where Johannesburg and Kruger Park are located, has sun-drenched, hazy summers. This northeast region, much of which is subtropical, has mild winters with chilly mornings and warm afternoons. This is actually the best time of year for viewing game since the animals love these temperatures.

As you can see, South Africa really does have a warm, inviting climate, even during the winter months. Also, because South Africa is located in the southern hemisphere, its seasons are opposite to what they are here in the U.S. This means that our autumn and winter months are the perfect time for basking in South Africa’s warm, summer sun.

South Africa’s culture is a unique blend of many people descending from African, Asian, and European groups. Archbishop Desmond Tutu best described South Africa when he called it “the Rainbow Nation.” Some of the predominant groups are the Venda, Sotho, Nguni (for which the Zulus and Xhosa are the largest, most well-known sub-groups), and the Shangaan-Tsonga, the four largest ethnic groups in South Africa. Other predominant groups are the Afrikaners of Dutch descent, whites of British ancestry, and large groups with Indian roots. Major urban areas are melting pots of culture where you will find shops and vendors selling foods and goods of all different types. On the streets of Cape Town, for example, you will find shops selling samosas and curries, corner stores with racks of slowly cured biltong (like beef jerky) which was perfected by the Dutch, tea shops where locals eat fresh scones alongside their hot tea, and many local vendors peddling hand-made African art, paintings, and wood-carvings.

The rural areas of South Africa are where you can still experience true African culture. There are entire communities and regions where locals still live in huts, or in basic housing, in a manner similar to the way in which past generations lived. Here you will find that men still pay dowries for their brides, cattle is a central status of wealth, traditional artwork flourishes, and best of all, dancing, singing, and music are an important part of life.

The most fantastic thing about South Africans, no matter their ethnicity or where they live, is that they are, for the most part, very accepting of others and optimistic about the future.

Go almost anywhere in SA and experience the ultimate combo of nature, wildlife, culture, adventure, heritage and vibe – you’re spoilt for choice, so pack it in!

There are many countries where you can go on safari but there is only one Kruger Park, one of the largest game reserves in the world. (Which also goes into Mozambique and Zimbabwe along with being in South Africa). You can either drive through the park on your own or take private tours. There are many lodges (like Villa Blaaskans) that you can stay over night at giving you the opportunity to do many game drives and see some of the magnificent animals on safari like those in the Big Five. Warning! Watching wildlife is addictive.

Discover a nation’s struggle for freedom whilst following the footsteps of Mandela, Hector Pieterson and many other celebrated revolutionaries. It will touch and inspire you.

South African cuisine has a lot of outside influences like from Europe and Asia from colonialism times. They have some of the tastiest meats in the world and venture outside of the typical beef and pork. Ostrich is found on many menus as is springbok and if you are lucky you might even get to enjoy Kudu. They enjoy a good BBQ aka braai and one of the meats I liked most was biltong, which is similar to beef jerky. South Africa is also big on beer production with their SAB World of Beer tour in Johannesburg said to be the top tourist attraction in the country.

South Africa has well developed infrastructure and modern amenities. Cities like Cape Town, Johannesburg, Pretoria, Durban, Knysna, and many other cities in South Africa have the kinds of structures, services, entertainment, restaurants, and offerings you would expect to find in American or European cities.

Despite being the most modern African country, South Africa still offers many of the attractions that draw people to Africa. It is infused with vibrant culture and has the wild African bush at its back door. This is important to understanding why South Africa is such a special place. It has a rare mix of modern development, African culture, outdoor attractions, and untamed wildlife that you will find nowhere else in the world.