Book your own flights to South Africa

The various options of flying to South Africa..

f you’re contemplating spending your vacation in a holiday home of Homes of Africa, it’s advisable you also consider the flight ticket to South Africa. Finding good and affordable tickets doesn’t have to be problematic. Several airlines offer multiple flights a day that fly from the Europe/USA to South Africa. Be it direct flights, or flights that transfer in cities such as Paris, London or Frankfurt. A fairly cheap price for a flight (retour) to South Africa (Johannesburg) would be around €600.- a ticket. Hold in account that transfer flights will most likely always be cheaper than direct flights to South Africa.

The period in which you to fly to South Africa South Africa greatly influences the amount of flights that are available. In the periods of  European holidays, it’s often the case that tickets are not as available and more expensive, whilst tickets in other periods tend to be on the cheaper side. If you’d like to cut some of the costs, flying from Frankfurt (Duitsland) or Brussel (België) to South Africa could save you a considerable amount of money, 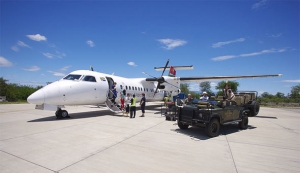 At your arrival in Johannesburg, you can choose to continue flying on to Hoedspruit (Eastgate airport). At Hoedspruit Airport you can be picked up by our host (Sue), who can subsequently bring you to a car rental company (Budget of Avis) in Hoedspruit. Hoedspruit Airport is situated 10 minutes from the village of Hoedspruit.

In need of some advice?

Already booked your plane tickets to South Africa, or still need to, we’d love to give you the best advice regarding plane tickets. Haven’t booked a stay yet? View the holiday homes of Homes of Africa. Don’t hesitate to ask any questions you might have, and contact Pim and Anne. They’re glad to be of service to you.