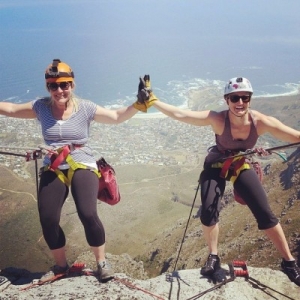 I had one word to describe this trip, it would be surreal.  Never did I imagine this would top my list of my most favorite destination I’ve ever traveled to.  From the delicious food, warm and friendly people, beautiful landscape and a variety of climates, to the adrenaline-filled adventures, this was one for the books.  Every day tells a different story…our only regret was that we didn’t schedule our vacation longer!

We spent the first part of our trip in Cape Town enjoying everything the city has to offer:  shark cage diving, sandboarding, winery tours, and a day ventured up Table Mountain (including abseiling down!).  There are so many activities in and around Cape Town area that cater to everyone’s interest.  Shark cage diving is not something you 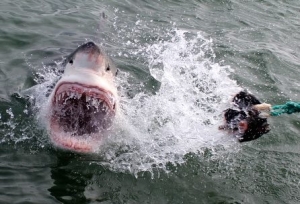 can do many places, and this was on our bucket list, so it was the first thing we booked!  The biggest tip to give when going on a vacation like this is bring your Go Pro Camera…we had it in the shark cage and the footage was amazing!  I also had it while abseiling down Table Mountain, and since that was a once in a lifetime thing for me, it was awesome to capture the moment.

The second half of our trip was spent near the Kruger area, where we stayed at Villa Blaaskans.  We opted to drive from Johannesburg to the villa, as recommended by Pim and Sue, and we were SO glad we did!  We made quite a few stops along the way at different areas, our favorite being God’s Window.  The hike was a nice break in the day and the view was breathtaking.  Unfortunately, we were only at the villa for three nights, but Pim and Sue really made sure we were experiencing the “must-see’s” based on what we wanted to do. Our first full day was spent at Elephant Whispers, which was one of my favorite parts on the entire trip.  We spent over two hours learning about elephants, interacting with them, and taking a short ride.  I would recommend this to anyone visiting the Kruger area…the experience is like nothing you’ve done before.  That afternoon, we did a self-drive through Kruger National Park.  This took us about six hours, but we were able to go at our own pace and saw so many cool animals (giraffes, warthogs, leopards, zebras, impala, kudu, and many, many elephants)! Rarely did we run into other cars/rangers, so we really felt like we were on our own safari.  That night, they booked us at The Hat and Creek Restaurant in Hoedspruit, and we’re still talking about the meals months later if that tells you anything.  The next day, we did a guided safari which was out of this world. The best part of this drive was seeing the lion kill on the side of the road.  We were crazy close and had a little bit of adrenaline rush going on!  I have to say though, that Villa Blaaskans was incredible in responding to my initial inquiry to helping our group book excursions, to the friendly staff while we were there.  Hands down one of the best villas I’ve stayed in and would highly recommend to anyone! 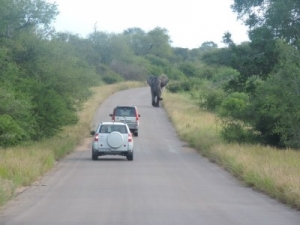 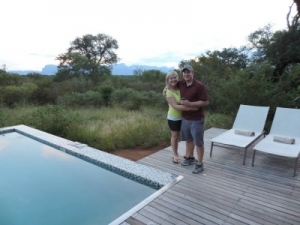 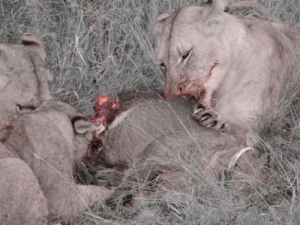 I could go on and on about this trip and have been recommending it to everyone at home.  It’s a once in a lifetime adventure that everyone should have the opportunity to do.  While ours was filled with many activities, there are so many things to do if you want more of a relaxing vacation.  I go back to the word surreal because that’s what it truly felt like: in the shark cage, hanging off the side of a mountain, taking pictures underneath a gigantic elephant, and riding in a jeep in the middle of the African bush.  Best vacation ever.

Until next time South Africa…